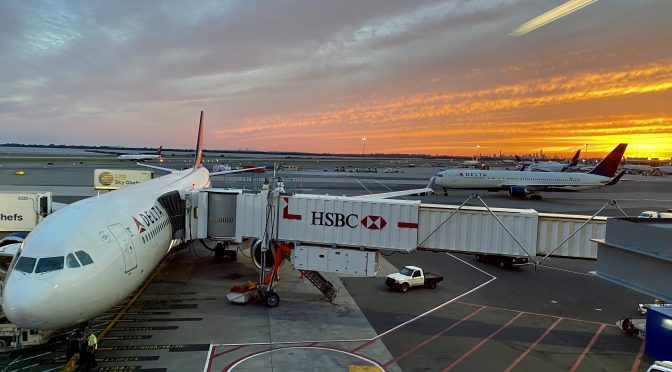 The summer travel outlook report, produced for the World Travel Market (WTM) by ForwardKeys, reveals that in the third quarter of the year, July, August and September, global air travel is set to reach 65% of where it was before the pandemic in 2019.

However, the revival is patchy, with some parts of the world doing much better than others and some types of travel, particularly beach holidays, being much more popular than urban city visits and sightseeing.

The current preference for beach holidays is well illustrated by a comparison of the top ten beach and urban destinations in Europe, ranked by Q3 flight bookings compared to 2019. All those in the beach list, which is led by Antalya, 81% ahead, Tirana, 36% ahead and Mykonos, 29% ahead, are showing extremely healthy demand, whereas, in the urban list, only Naples is ahead.

Furthermore, the four leading urban destinations, Naples, 5% ahead, Istanbul, flat, Athens, 5% behind, and Lisbon, 8% behind, are all also gateways to beach resorts too.

A similar trend is exhibited in the Americas, where Q3 bookings for air travel to the Caribbean, Central America and Mexico are 5% ahead of 2019 levels, whereas flight bookings to South America and to the US and Canada are, respectively, 25% and 31% behind. The destinations which are set to perform most strongly are Costa Rica, 24% ahead, Jamaica, 17% ahead and the Dominican Republic, 13% ahead.

Enthusiasm to travel again internationally is so strong that a rise in air fares has done relatively little to dampen demand. For example, the average fare from the US to Europe climbed by over 35% between January and May with no noticeable slowing in booking rates.

And these fares were nearly 60% above the previous year. Fares for shorter haul, intraregional travel (ie: within the Americas) also increased substantially, by 47%, which is less than for long haul. However, the demand for those tickets peaked in March.

Helpfully for the travel industry and for many destinations, American travelers are planning to stay longer and spend more than they did in 2019 but not as much as they did during the pandemic.

The average planned length of stay in Q3 is 12 days, up from 11 days in 2019. Last year, it was 16 days, but fewer people, with a more affluent profile, were traveling then. The proportion of people flying in premium cabin classes in Q3 is also set to rise, from 12% in 2019 to 15% this year. The relatively promising outlook for summer travel to Africa and the Middle East is due to a combination of factors. Several Middle Eastern airports act as hubs for travel between Asia Pacific and Europe, which has led to the Middle East benefiting from the revival of intercontinental travel, particularly driven by people returning to Asian countries to visit friends and relatives. The closure of Russian airspace has also contributed to the uplift in hub traffic. Cairo, 23% ahead, has increased connectivity to European markets. Nigeria, 14% ahead, Ghana, 8% ahead, and Ivory Coast, 1% ahead, with large diasporas in Europe and the US, are seeing expats return to visit friends and family. Tanzania, 3% ahead, Cape Verde, flat and the Seychelles, just 2% behind, are successfully attracting long haul visitors from Europe

The hotel was built around 1890 by the architect Monsieur Blanchi, born in Nice. He is renowned for his constructions of the Belle Epoque. The former Hotel “Pavillon de Rivoli” was built for a clientele “bourgoise” who came several months to stay during the winter time. A that period Nice was mostly know for its winter season and only few hotels had opened during the summer month.The “Belle Epoque” of the French Riviera. In 1888, Stephen Liegeard invents the name “French Riviera”. It becomes then the inescapable and popular meeting of the world elite, the winter, then the summer. It From these brilliant years, we still have testimonials to a life-style that will always remain an illustrious part of the Côte d’Azur’s heritage.

Nice is located between Cannes and Monaco, only 45 minutes away from Italy. It’s the heart of one of the most visited regions in the world : the Cote d’Azur or French Riviera. This central position is a majour asset for discovering the region through different aspects: gastronomy – art – nature – sport. Nice itself, offers a great choice of museums and galleries: Matisse, Chagall, Modern Art. The best known places to visite along the coast and in the hillside are within a radius of 60 miles at most from the Place Massena. The diversity of the mountain areas surrounding Nice is ideal for sports such as hiking, pony-trekking, mountain-biking, canyonning, para-gliding, golf, “via ferrata”, speleology, fishing .

Nice’s Airport Shuttle bus from the airport : Please, take the bus number: 98 (terminal I and terminal II) in direction of city center, Go of stop: Gambetta, then walk along the Promenade des Anglais to the hotel Negresco, Beside the main entrance the rue de Rivoli starts: straight on, around 100 m, on your right: Pavillon de Rivoli, Nr. 10 rue de Rivoli. 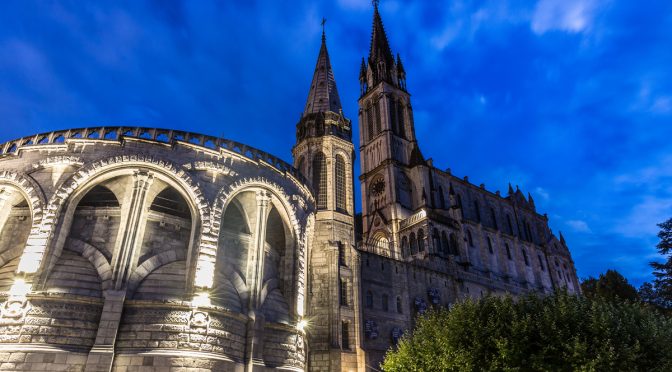 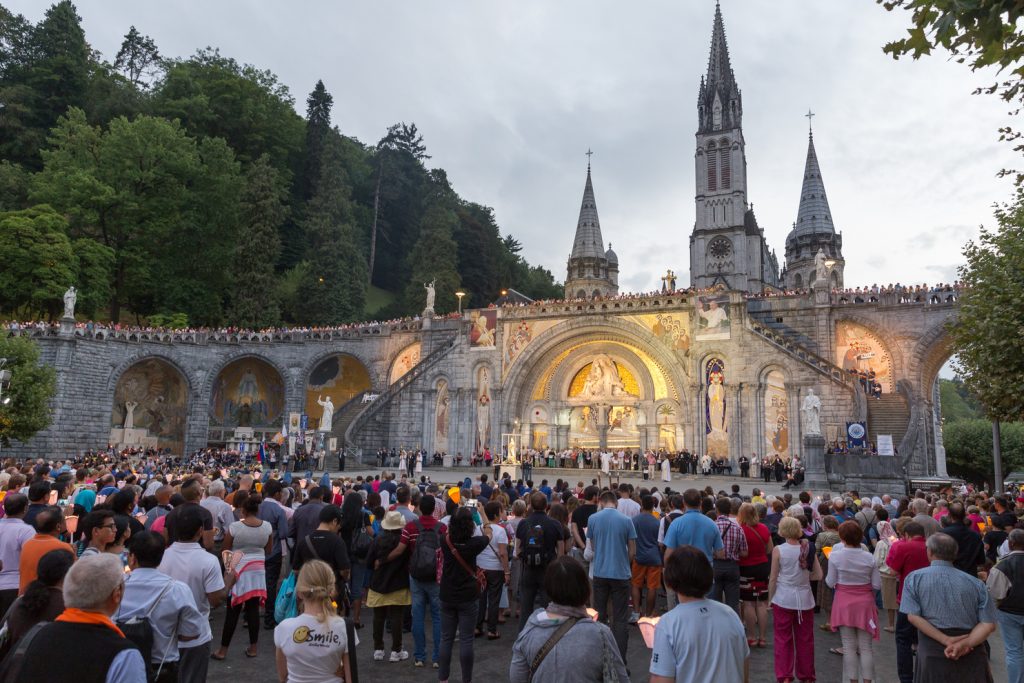 Welcoming five million visitors each year, Lourdes continues to be a must-visit for those in search of a religious experience. Nestled in the foothills of the Pyrenees Mountains, this acts as a picturesque backdrop to the Basilique Notre Dame du Roasaire with the Gavee de Pau river separating the Sanctuary from Lourdes main town. 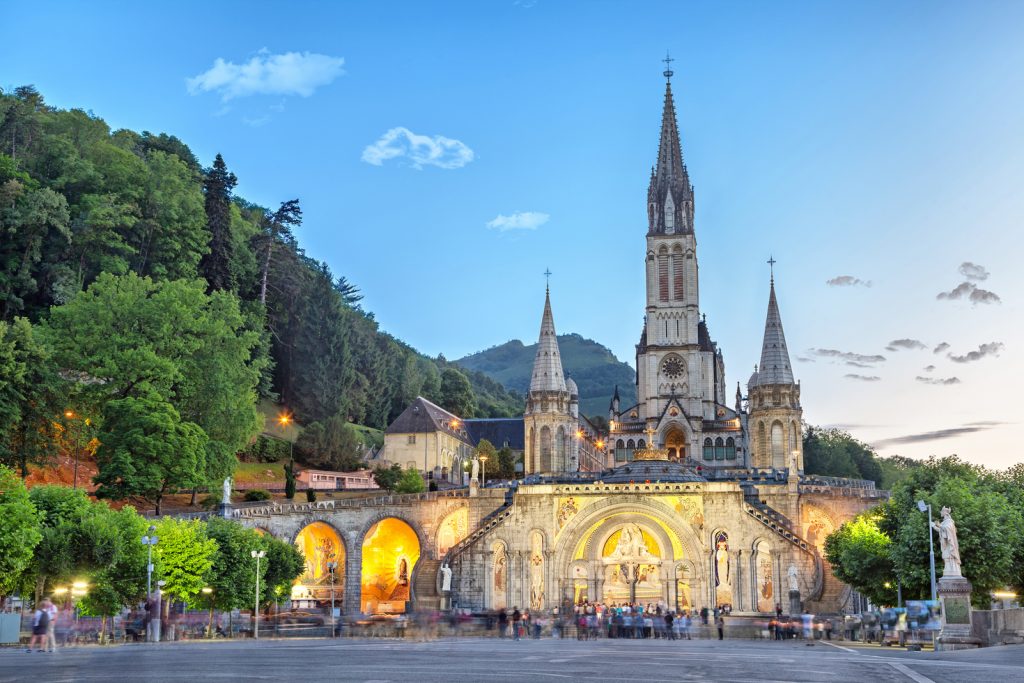 Beginning on June 3rd 2019, Click&Go are offering twice weekly Ryanair flights operating on Fridays and Mondays, with accommodation guaranteed within walking distance of the Sanctuary. Situated just a 15 to 20 minute drive from Lourdes/Tarbes, airport arrivals have the choice of taxi (€35 each way) or local bus for just €2 per person.

Once in Lourdes, travellers seeking physical, mental and spiritual healing can immerse themselves in a range of activities. These include daily 9am mass in the Chapel of St Cosmas and St Damian, a vigil mass every Saturday, and daily confession on the Chapel of Reconciliation. Those looking to participate in prayer and devotion can join in the Stations of the Cross and hear the Rosary said in the Grotto at 2.30pm daily.

Pilgrims can also look forward to the Eucharistic Procession, also known as the Procession of the Sick, each evening around the Sanctuary area or part take in an escorted tour. With a choice of a one or three day pilgrimage, and guided tours of the Sanctuary, there’s something for each visitor to explore and enjoy. Beyond the religious experience, there is plenty of history and nature to uncover such as Chateau fort de Lourdes, the fortified castle and botanical gardens, or take in the stunning 360 degree views of the Pyrenees from the observatory.

Paul Hackett, CEO of Click&Go, said, “We’re excited to be adding Lourdes to our wide range of city break destinations. With such an astounding history of visitor numbers, we hope the addition of this package will make the pilgrimage much easier and cost effective for those looking to travel.”

Hackett continued, “Lourdes is such a unique destination, particularly considering the healing and comfort it offers so many. Click&Go hope that even more Irish visitors can experience it’s incredible appeal next year.”

Prices for 3 night weekend breaks to Lourdes for June to October 2019:

Upgrade to full board available for €100pp

Allianz Riviera stadium (Stade de Nice) was one of the venues for the UEFA Euro 2016 event and hosted the following soccer matches:

The multi-use stadium in Nice, France is used mostly for soccer matches of host team OGC Nice and also for occasional home matches of rugby union club Toulon. The stadium has a capacity of 35,624 people but it is capable of accommodating up to 45,000 spectators for concerts, operas and large-scale shows. The stadium’s opening was on 22 September 2013. The stadium also houses the Musee National de Sport a collection of greatest sporting exploits from each era displayed through an innovative and immersive indoor display. See the football used in the World Cup 1998 final, Marcel Cerdan’s gloves, Jean-Claude Killy’s skis, Yannick Noah’s racket and the Olympic torches. The exhibition includes atmospheric sound installations, film projections and interactive challenges included an F1 car to test your driving skills.