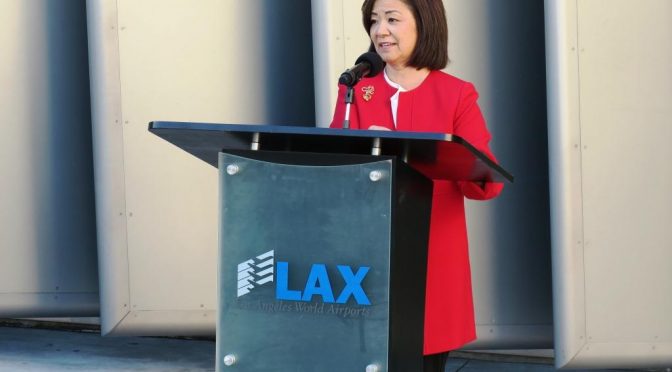 Besides crowded terminals, airport staffers are warning travelers to expect increased traffic in the Central Terminal Area (CTA) — more than 1.9 million vehicles. The week before Christmas will average more than 109,000 vehicles daily, peaking on Friday, December 22, with about 120,000 vehicles. The week between Christmas and New Year’s Day will average nearly 98,000 vehicles daily. Motorists and passengers waiting for public transportation should plan for delays of up to 30 minutes during periods of traffic congestion in the CTA.

Airport officials recommend departing travelers factor in additional time for traffic congestion and arrive in their airline terminals at least two hours prior to boarding time for domestic flights and at least three hours before boarding time for international flights.Travelers heading to regions where winter weather could be a factor are also advised to check their flight’s status before coming to LAX.

“From PUPs, to carolers, to volunteers to point travelers in the right direction, we want to make a trip to LAX smooth and enjoyable this holiday season,” said Barbara Yamamoto, Chief Experience Officer at LAWA. “Our ask for our guests? Reduce your stress – arrive early, grab a bite, or even do some last minute shopping on your way home for the holidays.”

Passengers who use Long-Term Parking Lot C should also be aware of a reduction in available spaces due to reconstruction and reconfiguration. The entrance to Lot C from Westchester Parkway is closed. Electronic signs will be used to advise motorists when Lot C is full. Plan ahead and consider one of the other nearby long-term parking options.

FlyAway riders will find curbside coordinators in safety vests located throughout LAX to assist them from 9:30 a.m. to 11:30 p.m. most days throughout the holiday travel period.

Rather than circling the Central Terminal Area until arriving passengers reach terminal curbside for pick up, motorists can park and wait up to two hours free at the LAX Cell Phone Waiting Lot at 6221 West 96th Street (96th Street and Vicksburg Avenue), adjacent to the entrance of LAX Parking Lot C).To avoid the CTA altogether, motorists can ask arriving passengers to board the LAX Shuttle bus to Lot C and meet them in the Cell Phone Waiting Lot.

Active duty service members are reminded that the Bob Hope USO Center, located between Terminals 1 and 2, is open 24 hours a day, seven days a week as they and family members travel through LAX.

To help keep traffic and passengers moving, and reduce the stress of travel, passengers can expect:

To help speed their journeys, travelers are encouraged to enroll in TSA Pre√® or other trusted-traveler programs such as Customs & Border Protection’s Global Entry, which improve security and reduce wait times.

The public is reminded that LAX’s $14-billion modernization program is still on-going. When coming to LAX, passengers should look for and follow way-finding signage near all construction sites to ensure their safety and to enhance mobility.For real-time LAX traffic conditions, information on the status and locations of airport construction, “insider” traffic tips, and videos showing short-cuts, visit www.flyLAX.com.Motorists and travelers also can receive real-time status of airport conditions by accessing @FlyLAXairport and @LAAirportPD Twitter feeds.LAX is also on WAZE, the community-based traffic navigation app.

LAX is the fourth busiest airport in the world, second in the United States, and was named Skytrax’ 2017 Top 10 Most Improved Airports. LAX served more than 80.9 million passengers in 2016. LAX offers 737 daily nonstop flights to 100 cities in the U.S. and 1,386 weekly nonstop flights to 88 cities in 44 countries on 73 commercial air carriers. LAX ranks 14th in the world and fifth in the U.S. in air cargo tonnage processed, with more than 2.2 million tons of air cargo valued at over $101.4 billion. LAX handled 697,138 operations (landings and takeoffs) in 2016.

LAX is also the second most popular airport in the world to appear on Instagram according to wego.com. LAX is part of a system of two Southern California airports – along with Van Nuys general aviation – that are owned and operated by Los Angeles World Airports, a proprietary department of the City of Los Angeles that receives no funding from the City’s general fund.