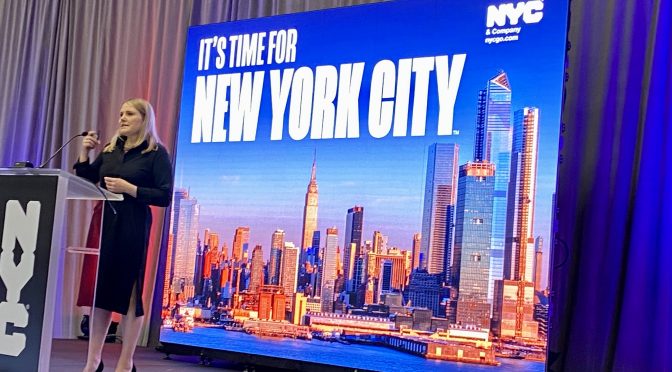 “New York City is experiencing an extraordinary revival, with the iconic sites visitors know and love, plus many dynamic, new developments across all five boroughs,” said Fred Dixon, President, and CEO of NYC & Company. “From our world-class attractions, hotels, and Broadway shows to the authentic small businesses, and diverse experiences found across neighborhoods citywide, NYC is back in a big way and already welcoming visitors from around the globe.”

Destination highlights include 12,000 new hotel rooms coming online in the next three years with new properties such as Aman New York and NYC’s second Ritz-Carlton debuting this summer; more than 20 new Broadway shows from classic revivals to innovative debuts; and upcoming developments and openings across infrastructure and transportation, with upgrades across the region’s three major airports; arts and culture including the brand-new Museum of Broadway, The Louis Armstrong Center and the American Museum of Natural History’s Gilder Center opening this year, with The American LGBTQ+ Museum and the Universal Hip Hop Museum coming soon; performing arts venues such as Lincoln Center’s reimagined David Geffen Hall debuting in October and the iconic Apollo Theater expansion next year; culinary highlights from new fine dining establishments to unique food halls across the five boroughs; retail including the renovated Tiffany & Co. Flagship on Fifth Avenue and the return of Century 21; big events including NYC Pride, the New York City E-Prix, the US Open Tennis Championships and summer programming across five boroughs this summer; and more.

During IPW, NYC & Company issued an updated press resource on 22 Reasons to Visit New York City in 2022 and a brand-new “What’s New + Trending in NYC” video for the media and trade.

The organization also announced the latest iteration of its neighborhood-centric Get Local NYC campaign, inspiring visitors to explore Manhattan Like a New Yorker. Originally launched in March, the new five-borough initiative encourages visitors to support small businesses citywide. Guides to Brooklyn Like a New Yorker and Bronx Like a New Yorker have already been released, with features on Staten Island and Queens set to launch this summer.

This summer also marks the 30th Anniversary of NYC Restaurant Week, from July 18-August 21. To commemorate this historic milestone, NYC & Company plans to launch a “Year of Culinary” in New York City.

Recently-launched multicultural platforms on NYCGO.com include The Black Experience in NYC, The Latino Experience in NYC, and the latest addition, The Asian Experience in NYC.NYC & Company is also the first US tourism organization to produce a Halal Travel Guide for Muslim visitors and continues to update visitor information on LGBTQ+ NYC and Accessible NYC.

Additionally, NYC & Company and Broadway Inbound will once again host IPW’s NYC Center Stage luncheon today. The program will be emcee’d by Michael James Scott, currently starring as Genie in Aladdin, and will feature musical numbers from Aladdin, Chicago, The Lion King, and Moulin Rouge! The Musical, The Phantom of the Opera, and Wicked.

For more on all, there is to see and do in New York City’s five boroughs, visit NYCGO.com.