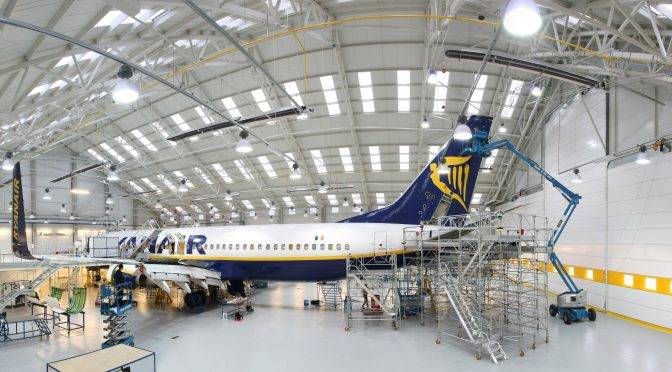 Five hundred aircraft – this is the number of planes that have already been serviced by Kaunas Aircraft Maintenance Service (KAMS), a Ryanair aircraft maintenance base in Lithuania located near Kaunas Airport. “You could say that practically every single Ryanair aircraft flying today has most probably been in our hangars and has been maintained at the hands of Kaunas’ specialists,” Karolis Čepukas, head of the company, said smiling, demonstrating the firm’s two hangars in which two Boeing 737-800 aircraft can be maintained simultaneously.

In the interview below, Karolis Čepukas speaks about his highly skilled specialists, challenges in the labour market and solutions for coping, as well as about the daily life of maintenance workers, which is both romantic and technical and full of modern technology. He has headed KAMS from the very beginning.

KAMS’ main activity is the maintenance of Ryanair aircraft. It started operations in 2012 with just one hangar and 45 employees. A year later, the second hangar was opened, doubling the company’s capacity and increasing the number of employees to 100.
“We have experienced stable growth over the last five years and today we have over 200 employees. While we would like to continue growing, we are hindered by a lack of suitably skilled workers. For this reason, we are working a lot with state authorities to generate more specialised training programmes designed for the aircraft industry,” Mr Čepukas said.

“For instance, since the beginning of this year, we have been cooperating with Kaunas University of Technology, Vilnius Gediminas Technical University, Kaunas Mechanical School and Kaunas Technical College – all these educational institutions train aircraft engineering and mechanics-related specialists,” he continued, adding that even after graduating from these studies a young man has to continue training in the company to adjust his abilities and skills to the company’s needs.

It is very clear that in the near future the demand for specific specialists will grow dramatically, for mechanics who are experts in avionics and composites and aviation electricians.
“Only a few specialists in this field are trained in Lithuania annually – which is not enough. Given the trends and the speed as well as the extent to which aircraft depend on electronics, it is evident that there will be continued demand for avionics professionals,” Mr Čepukas noted.

Comprehensive aircraft maintenance – in as little as two weeks

“At first it was intended to provide maintenance for two-year-old aircraft in Kaunas. Each plane would spend a couple of days in the hangar. Currently, we manage to service planes that are from eight to eleven years old. The older the aircraft, the longer is needed for repairs – more areas have to be inspected and checked and more works have to be conducted. All of Ryanair’s planes are the same – Boeing 737-800 – which means that maintenance is simpler: every time it’s the same aircraft and the same maintenance procedures and conditions.”
It takes just two weeks to service each aircraft which, according to Mr Čepukas, is a very short period compared to the normal market situation.
The average age of Ryanair’s aircraft is 6.8 years, which is very little bearing in mind that the lifecycle of an aircraft is 25 years. Ryanair has ordered a further 230 new planes, so the average age of the airline’s fleet will “become even younger” and it is likely that in five years the average age of the fleet will be less than five years’ old.

Proud of the first employees’ accomplishments

After Ryanair decided to set up in Kaunas, the first selection procedures and contact fairs were organised in order to “check” the market and make sure that interest was actually huge.
“A considerable number of those who started with us six years ago are still with us. Those who came as mechanics have become engineers – and this is a considerable achievement both in terms of Kaunas and Lithuania. An engineer certifies the work done; to become an engineer requires at least five years’ experience as well as passing exams in 13 modules and aircraft types. It is a long road and hard work. We are, therefore, justifiably proud of our first ten employees who have become engineers, and this number has been growing annually,” Mr Čepukas said.

Impressive expansion throughout the company

The KAMS operation in Kaunas was the second company established by Ryanair to conduct comprehensive repair of aircraft – the first was set up in Prestwick, Scotland. A third has been set up in Wroclaw, Poland, and a fourth is being established in Spain.
“Given today’s needs, it is obvious that to service the expanding Ryanair fleet efficiently, we need to double the number of hangars in Europe,” the CEO of KAMS said. “We are not the only ones who have been growing and expanding; at the moment, Ryanair has about 13,000 employees, and according to forecasts, in five years the staff will total 20,000.”

Great potential for the aviation business in Lithuania

As Mr Čepukas put it, both Ryanair’s representatives and other aviation industry representatives in Lithuania understand very well that to help existing companies grow and attract new ones, there must be a good pool of employees: “We know that by producing well-trained aviation engineers, mechanics and other specialists, the aviation industry could repeat the success story of the IT industry in Lithuania.
We have seen over the first five years that people who come to us have a critical shortage of skills; for this reason, we established a training department this year, on basic Ryanair maintenance. From now on, we will admit two groups of up to 20 people per year and train them.”
Over two years, during which theoretical and practical training is provided, trainees not only study but also work, and after two years they become fully fledged mechanics and the main labour force of the company.
Source: Kaunasin.lt