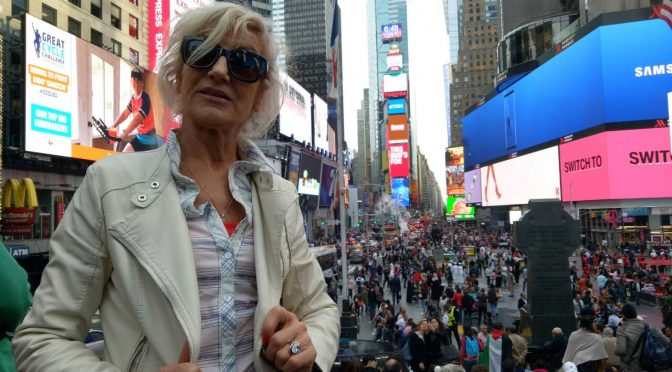 NYC & Company, the official destination marketing organization for New York City, toasts all visitors who intend to gather in Times Square for its iconic ball drop and highlights celebrations of interest across the boroughs for New Year’s Eve. Upon the joyous occasion of the holidays, the City’s celebrations remain timeless.

“Every New Year’s Eve, millions of visitors come to New York City to experience the unique vibrancy and excitement of our five-borough destination,” said Fred Dixon, NYC & Company’s president and CEO. “We invite travellers to explore Times Square during its biggest spotlight moment and to take advantage of the many other events happening throughout the City’s neighbourhoods.”

Highlighted below are highly anticipated celebrations in Times Square and beyond where locals and travellers will raise glasses, toast the past and usher in the new year from borough to shining borough.

Seven-foot-tall numbers “1” and “8” in 2-0-1-8 are now in Times Square for public photo opportunities through this Friday, December 22. Information available here.

On December 28 from noon to 1pm, locals and visitors will gather in the Broadway Plaza on Times Square for Good Riddance Day, as bad memories from 2017 are torn apart to make room for the new year, with help from Shred-It.

In the lead up to the big night, through December 29, visitors can visit the Wishing Wall to note their hopes, dreams and goals for 2018 on the confetti that will be released at midnight to float over Midtown and the approximately one million visitors who congregate in Times Square for the ball drop.

The 11,875-pound ball, covered with 2,688 Waterford Crystal triangles, is capable of a palette of more than 16 million kaleidoscopic colors and is mounted atop One Times Square. As it descends at the countdown, a host of nearby venues will serve up new years’ cheer with a view, available here.

Worldwide viewers (estimated at over one billion) will join the revelry by tuning into Dick Clark’s New Year’s Rockin’ Eve with Ryan Seacrest in Times Square, which will be hosted by Ryan Seacrest and Jenny McCarthy with performances by Camila Cabello, Nick Jonas and Sugarland planned.

The Times Square New Year’s Eve Live celebration will formally open with a performance by the Tongliang Athletics Dragon Dance thanks to a partnership with Chongqing, China. Multi-Platinum Pop Singer and Songwriter Andy Grammer will headline the musical line-up. Country music singer-songwriter Lauren Alaina will perform a selection of her number one hits and dance crew Kinjaz will also present numbers.

Viewers around the world can also visit TimesSquareNYC.org,
NewYearsEve.nyc and TimesSquareBall.net to watch the annual event.

From east to west, Midtown hotels will ring in 2018 with grand revelry and guests in lavish attire. High above the lights of Fifth Avenue, The Peninsula New York’s Salon de Ning will be transformed into a chic sky-lit penthouse with the East Terrace enclosed and heated, a performance by UK rock and pop cover band The Chip Shop Boys plus ball drop projection at midnight.

One block to the west, The Sanctuary Hotel New York’s Haven Rooftop will offer group packages for its heated and tented New Year’s Eve party. Guests will enjoy a DJ from 8pm to 2am, a prix -fixe dinner and top shelf open bar.

An NYC & Company guide to New Year’s Eve in Times Square is here.

Beyond Midtown Manhattan, countless other celebrations will take place.

New York City’s only casino, Resorts World Casino invites those 21 and older to celebrate NYE at BAR360 with live performance by TKA K7 (a NYC-born freestyle emcee who rose to fame in the 80s and 90s.) Guests can also enjoy its 4,200 slot machines and 1,300 electronic table games. (Queens).

Modernist, industrial chic Z Hotel in Long Island City, Queens, will offer a stay, plus admission to the “Dueling Pianos” rock and roll sing-along in Cellar Bar with open bar and buffet, for under $100 USD on New Year’s Eve. (Queens).

Thai Rock in the Rockaways, Queens, will serve up fine Thai dining, dancing, imbibing and live music from band Leaders of the Shift who will perform “Psychedelic Cosmic Rock N Roll” on New Year’s Eve.(Queens).

The 8th Annual New Era Pinstripe Bowl at Yankee Stadium takes place prior to New Year’s Eve. Attendees can consider a stay at the historied Opera House Hotel, first built as a performance venue by Broadway producers and designed by the architect of Harlem’s Apollo Theater. (Bronx).

Beginning at 11am on New Year’s Eve day, the Bronx Beer Hall will host “Brunch Brunch Brunch” in the heart of the Arthur Avenue market. (Bronx).

Also on Arthur Avenue, Zero Otto Nove, which boasts Salerno-style cooking and is in the 2018 Michelin guide offers a New Year’s Eve dinner in the “Little Italy” of the Bronx. The restaurant will not remain open until midnight. (Bronx).

Events On New Year’s Day & Beyond:
Coney Island USA will host their 4th annual NYE celebration in Steeplechase Plaza, with a fireworks display from the historic Parachute Jump. Select boardwalk restaurants and attractions will be open, including B&B Carousell, Deno’s Wonder Wheel and Thunderbolt roller coaster. A digital burst ball drop rings in 2018, followed by a Circus Sideshow Fire Spectacular at 1am. (Brooklyn).

Celebrating its 20th year, the Time’s Up New Year’ Eve Bike Ride & Afterparty will reverse direction, beginning at Manhattan’s Plaza Hotel at 9:30pm and ending in Brooklyn with a party at the Museum of Reclaimed Urban Space. (Manhattan/Brooklyn).

For an unforgettable evening Circle Line will offer their New Year’s Eve Fireworks Cruise sailing New York Harbour from 9pm to 1am. A DJ and midnight champagne toast add a lively touch to the 21+ to drink, 18+ to enter party. (Manhattan).

The Empire State Building will ring in 2018 with a festive multicolored sparkling LED confetti lighting on Dec 31, 2017. Five minutes before midnight, the building will switch to its signature white lights, sparkling again in the New Year through sunrise on January 1, 2018. Lighting schedule here.

Popular 90s band Phish will return to Madison Square Garden from December 28 to 31. New Year’s Eve attendees are invited to rock into 2018. (Manhattan).

The New York Philharmonic’s New Year’s Eve: Bernstein on Broadway and the Metropolitan Opera’sProduction Premiere of Tosca are not to be missed. (Manhattan).

Running enthusiasts can lace up for the four-mile NYRR Midnight Run in Central Park on NYE. After going through security via entrances at West 72nd Street and Central Park West or East 72nd Street and Fifth Avenue, registered runners and their +1 will gather at Rumsey Playfield in Central Park. Kicking off at 10pm, the race (to which many wear costumes) will conclude by midnight with a spectacular fireworks display at its completion. (Manhattan).

The Coney Island Polar Bear Club New Year’s Day Plunge is free with registration and begins at 1pm at the Stillwell Avenue boardwalk entrance. Participants get free admission to the New York Aquarium and a post-dip warm up at Coney Island Brewing Company and Steeplechase Beer Garden. (Brooklyn).

The NHL Centennial Fan Arena and Stanley Cup at Madison Square Park will be a free fan event December 27–28 in the lead up to the 2018 NHL Winter Classic. It will feature a pop-up rink, a VR Zamboni experience, photo opportunities with the Stanley Cup and more. Additional information here.(Manhattan).