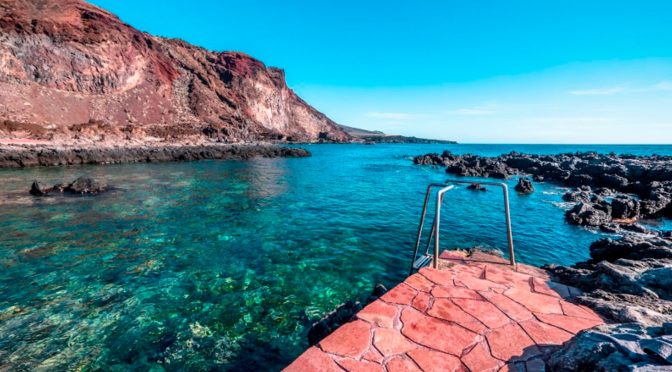 It’s time to get to know El Hierro, a quiet paradise that captivates visitors with its exquisite volcanic landscapes, lush green forests, pristine waters of its marine reserve and the calm lifestyle of its almost 11,000 inhabitants. This gem of the Canaries is a UNESCO World Biosphere Reserve and Geopark and is a perfect example of sustainable tourism and is waiting to be rediscovered. Known in Spanish as the ‘Meridian Island’, El Hierro is recognised as a magical place. Read on to find out why…

El Hierro, the second smallest island of the Canaries after La Graciosa, aims to be the first 100% sustainable island in the world within four to eight years. The island has already set a world record last summer by covering the entire populations’ energy needs for 24 days using only renewable energy. One major factor in reaching this milestone was the construction of the Gorona del Viento hydroelectric plant, which supplies about 60% of the island’s energy needs.   El Hierro has always been ahead of its time. Its search for a sustainable living began in 1997 when the islands established an innovative action plan that included energy self-sufficiency, organic farming and a zero waste, environmentally friendly tourism model.

El Hierro is world-famous for its spectacular underwater scenery and wildlife. The La Restinga Marine Reserve is an internationally acclaimed diving sanctuary inhabited by numerous animal species. El Hierro is home to some of the best diving spots in the Canary Islands. The volcanic eruptions that took place between 2011 and 2012 led to a regeneration of the seabed that gave rise to very particular biodiversity and a unique underwater landscape full of life, including dolphins, turtles, stingrays, barracudas and peaceful white sharks to name but a few.

Designed by the great Canarian architect César Manrique and declared a Site of Cultural Interest, La Peña viewpoint is the most frequented standpoint in El Hierro. Set over the steep cliff, this balcony to the Atlantic Ocean lays El Golfo valley at your feet and offers one of the best views of the island, including views of the unspoilt Salmor rocks, a sanctuary for El Hierro’s giant native lizards.

Charco Azul is without any doubt one of the most incredible bathing spots in El Hierro. Located in El Golfo, a magnificent valley along the rugged coastline, this natural pool is one of the finest examples of the exclusive volcanic flows. Created naturally by flowing lava, this area doesn’t just allow you to bathe in its turquoise pools, but also to relax, refresh and recharge yourself. Despite its small size, the cove of Tacorón in the south of the island is one of the best beaches in El Hierro. This quiet and secluded cove is known for its stunning views of El Julan and calm Atlantic waters.

The island of El Hierro has a special charm with its geological microcosm where 58% of the surface area is officially protected. Its 268 square kilometres of stunning landscapes will captivate you with the contrast between the dark volcanic ground and lush green forests. In just a couple of steps, the trails and ancient paths will take you from the sea to the mountains. Discover the Bimbaches rock carvings in El Julan and experience the incredible views on an excursion to Pico de Malpaso, the highest point of El Hierro.

In the town of San Andrés is where the Garoé Tree once stood. Adored by the Bimbaches, the ancient inhabitants of El Hierro, the Garoé Tree is a real symbol of island identity. Legend has it that its leaves could collect enough water to supply the whole population of the island until it was destroyed by a hurricane in the 17th century and a lime tree was planted in its place. About 500 metres from the tree is the Garoé Visitors Centre, where visitors can learn about the past of the native islanders and how they lived. The 16km water route trail also starts and ends in San Andrés, showing the importance of water and the history behind it. In the extreme west of the Island you can find El Sabinar, a forest full of centuries-old trees whose incredible ability to adapt to the elements will leave you in complete awe. This open forest is full of indigenous juniper trees with twisted trunks as a result of the trade winds and is a must-see on your trip to El Hierro.