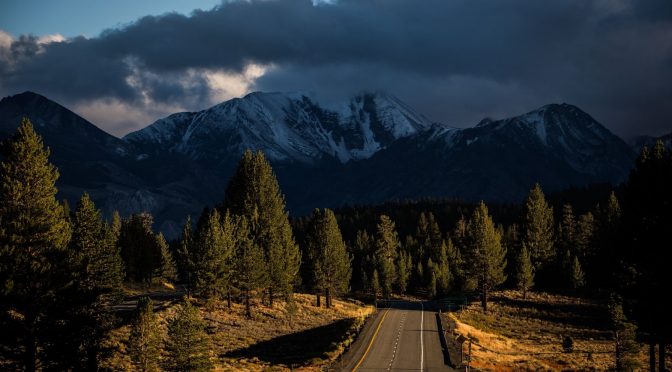 Looking for an alternative to the well-trodden Highway 1 this year? On the eastern side of California’s Sierra Nevada mountain range lies U.S. Highway 395, home to outstanding scenery and geology. This incredible road skirts the intersection of arid desert, rolling sagebrush and alpine mountains, with cragged mountain tops soaring 12,000 feet high. Each turnoff shelters some of the Sierra’s most compelling – and strangest – sights, and a very different side of California to what most people imagine.

Nestled in the two million acres of Inyo National Forest are dozens of remote wilderness trails lined by some of the oldest trees in the world (bristlecone pines). The high-altitude town of Mammoth Lakes is a must-visit. It hides expansive valleys, crystal clear lakes, natural hot springs and wildflower-lined mountain hikes, bursting with colour. The region provides refuge and critical migration corridors for plants and animals to survive climate change.

The Mammoth Lakes Basin has great hiking trails and even better views. Our favourite is Parker Lake – a fascinating, wildflower-trimmed trail, tucked in a small canyon overshadowed by the 12,000 ft. craggy peaks of the Sierra Crest. Visitors can also take the mountain gondola from the Main Lodge to the summit of Mammoth Mountain for spectacular views out over the surrounding mountains and the Minarets.  Mammoth Mountain is California’s largest (and highest) ski resort, but in the summer and autumn months the mountain’s epic ski runs make way for mountain bikers and hikers. It’s a perfect spot for those looking to escape into the wilderness and enjoy the laid-back California mountain life.

In the town itself, visitors can hit up Mammoth Brewing Company, makers of award-winning craft beer since 1995. Since you’re driving US 395, it’s only right that you order the IPA 395, flavoured with juniper and sage.

Further up the 395 lies the magnificent 1 million year-old State Reserve Mono Lake, with its otherworldly ‘tufa towers’ (mineral formations) that rise up out of the water and look like you’re standing on the moon. This ancient inland sea is saltier than the ocean and harbours a thriving but fragile ecosystem of interdependent plant and animal species, some of which are found nowhere else in the world but Mono Lake.

Carry on north to Bodie, one of the largest unrestored ghost towns in the U.S. Preserved in a state of “arrested decay”, visitors can wander amongst deserted buildings that were constructed in the 1850s when gold fever gripped the Sierra before being abruptly abandoned when the gold rush mining boom went bust. Our one tip? Don’t take anything from the park – eager visitors who have lifted a souvenir have been known to be haunted upon leaving Bodie.  www.visitmammoth.com