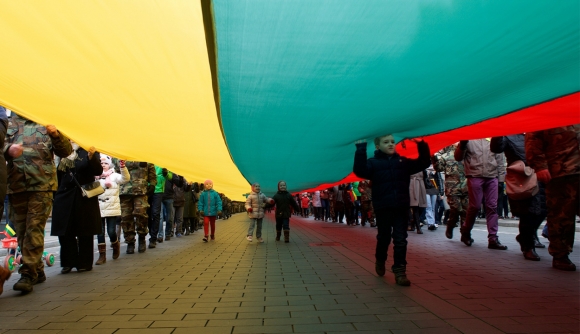 Vilnius is ready for a weekly celebration of the Centennial of the Restoration of the State of Lithuania, from 9 to 18 February. According to the City of Vilnius, efforts will be made to take the entire old town of Vilnius back to 1918. Plenty of events and celebrations have been planned for this particular week, involving active participation of the restaurants and bars, free tours around Vilnius, special illumination of the Independence Act-related key buildings, the distribution of the ancient publication, all this leading to the concert at the Cathedral Square with an element unseen until now – the Centennial Bell.

“Back then, in 1918, Vilnius happened to be in the centre of events, just like now, when the capital is setting the trend and showing the direction. Therefore, we wish to have the anniversary of this extremely important date for Lithuania marked not only officially. Vilnius has been and will remain an open city, therefore, we will try to involve as many as possible people from Vilnius and beyond in this celebration. The highlight of the celebrations will be travelling back in time to see Vilnius as it was in the fateful 1918, with its sounds and tastes”, says Remigijus Šimašius, Mayor of Vilnius.

The Mayor has noted that the upcoming February 16th will feature not only already recognizable highlights, such as the tricolour traffic light campaign, bonfires along Gediminas Avenue (100 this time), youth march, free tours but also new ones, including cooperation with restaurants etc. with a view to achieving a 1918 flashback through century-old tastes and ambiance, as well as the then street names, the tricolour illumination of bridges and the interactive Centennial Bell.

“February is not the best month for celebrations in terms of the weather, so we want to create warm atmosphere downtown to attract the population. I am certain that the old advertisements, restaurant signs, typical cuisine and music will definitely take you back in time to Vilnius in 1918”, says the Mayor of Vilnius.

Remigijus Šimašius invites everyone’s creative involvement in the celebration of this week, for example, by using retro graphics in their social network accounts, by making aged inter war-style business advertisements, which will compete to be published in Vilnius Newspaper, issued specifically for this occasion.

The key personalities and the buildings of that time will not be forgotten either – Vilnius public transport will feature the photos and quotations by the signatories, and the ten key centennial buildings will enjoy a special tricolour illumination.

In memory of the patriarch of the nation, Jonas Basanavičius, a largest live installation has been planned with several hundred bearded men.

All the events, festivals, restaurants, bars and hotels, as well as the photos of the old Vilnius will soon be available on a special Vilnius map: www.vilnius1918.lt.

List of events and highlights planned for the centennial celebration in Vilnius: